Kia ora and welcome to a new year. A time to make resolutions and fail at them. So let’s try to make them realistic. Personally, I’ve been promising to write more on my blog here at kittyfitton.com so let’s see how long I can keep this up.

This year is going to be about me. And realising my goal to become a professional public speaker. I’ve spoken at a number of events and places, and very much enjoyed sharing my story and helping to motivate and encourage other people. And because I enjoyed the process of presenting so much, I realised I should turn the negative of my Parkinson’s Disease into something that would instead be a positive. A change for good. Something to help others by. And so begins my quest to become great at professional public speaking.

I called a National Speaking group in Auckland and received some excellent advice there. “If you want to be a concert pianist, you have to learn to play” I was told. Go forth and speak. Talk to groups in and around your area and hone your skills. So that is exactly what I’ll do.

I’m quite lucky I suppose, I’ve always been that irritating person that leaps forward when you’re told at those awful team building sessions you’ll have to do some public speaking. Not a problem! When? Where? What topic? I’ve always been able to talk the hind leg off a donkey. I may as well make it interesting, right? 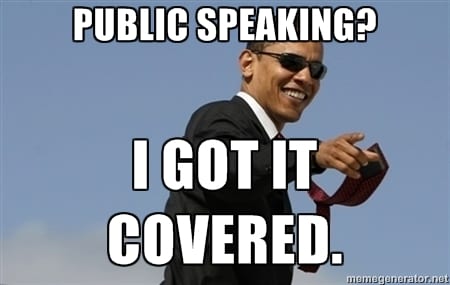 And while I ponder making it interesting I recall the comments from a lunch I attended at Christmas for the Parkinson’s Society in Waikanae, Kapiti Coast of Wellington. There I encountered people in advanced stages of Parkinson’s, which was quite confronting. However, many people recognised me from the seminar I presented at, and said such nice things. One chap in particular is strong in my memory. He took my hand and said “You need to keep talking about this. You have a gift for it.” I was very moved and promised him I would.

And I will. And here is the first step along that road. Why have I put this off for so long? It’s the thing I have dreamed of all my life. I suppose it’s the fear of failure. But I shall take my own advice. I’ve never failed at anything. I’m not about to start now. Bring it on, and watch me turn 2019 into the year I really do become a professional speaker in not only Wellington, but across New Zealand, and perhaps who knows? Maybe even further afield too.